The U.S. has paid a huge price for subservience to Israel, writes Paul Findley in his most recent article. I’ve appended it slightly truncated and inserted a video (69 minutes) after it. Note that the video has a 5 minute fawning biographical introduction before Findley speaks.

Perhaps now best known for speaking out against undue influence exerted by the Israel Lobby and its role in driving U.S. foreign policy, Republican Paul Findley (R-IL) is a 22 year veteran of the U.S. Congress and the author of five books, including the bestseller, They Dare to Speak Out: People and Institutions Confront Israel’s Lobby. Findley also founded The Council for the National Interest (CNI), a non-partisan grassroots organization that advocates a new direction for U.S. Middle East policy. 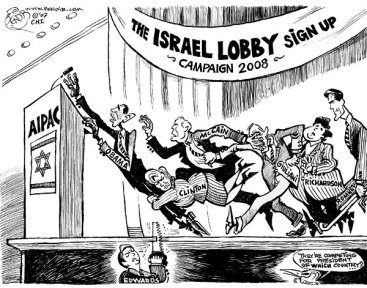 It also comes amid the most Zionist Congress to date, as the Democrat candidates fall over themselves to declare allegiance to and align themselves with AIPAC more markedly than the Republicans, perhaps since they are the “challenging” party, or at least the other arm of the War Party.

While “it is always darkest before the dawn” may be a trite saying, I certainly hope it holds here and that more Americans wake up to the occupation of their country by neocons whose allegiance not only lies elsewhere but whose bellicose worldview endangers us all.

Israel – and only Israel – urged the United States to invade Iraq. Israel’s lobby in Washington pushed hard and prevailed.

Despite this grim record, U.S. subservience to the wishes of Israel’s leaders does not change. Israel is the only nation urging the United States to attack Iran. The lobby is pushing hard again. If the United States assaults Iran it will be on Israel’s behalf.

Congress, like the rest of America, is totally devoid of debate on the amazing role of this small nation in critical U.S. policy. Members are fulsome in public praise of the Jewish state, but no politician mentions the illegal behavior of Israel or the staggering burden it imposes on our country.

How did Israel gain this influence?

It all started 40 years ago. On June 8, 1967, the U.S. commander in chief, President Lyndon B. Johnson, turned his back on the crew of a U.S. Navy ship, the USS Liberty, despite the fact that the ship was under deadly assault by Israel’s air and sea forces. The Israelis were engaged in an ugly scheme to lure America into their war against Arab states. They tried to destroy the Liberty and its entire crew, then pin the blame on the Arabs. This, they reasoned, would outrage the American people and immediately lead the United States to join Israel’s battle against Arabs.

The scheme almost worked. It failed because, despite the carefully planned multipronged assault, the Liberty crew managed to broadcast an SOS over a makeshift antenna. When the appeal reached U.S. aircraft carriers nearby, the commanders immediately launched fighter planes to defend the ship. Informed of the launch, President Johnson ordered the rescue planes to turn back immediately.

For the first time in history, forces of the U.S. Navy were denied the right to defend a Navy ship under attack. Johnson said, “I don’t care if the ship sinks, I am not going to embarrass an ally.” Those were his exact words, heard by Navy personnel listening to radio relays.

The ally Johnson refused to embarrass was Israel. When the SOS reached the top military commanders in Israel, they immediately canceled the assault, claiming it was a case of mistaken identity. At the White House, Johnson accepted Israel’s claim, even though he knew it was a lie. Then Johnson magnified the day’s infamy by ordering a coverup of the truth. Liberty survivors were sworn to secrecy. Even those in hospital beds and badly wounded were threatened with court martial if they told anyone what actually happened. The coverup has been continued by every administration since Johnson’s.

It proved to be a fateful turning point in Israel’s power over U.S. foreign policy. The Liberty experience convinced Israeli officials that they could get by with literally anything – even the murder of U.S. sailors – in their manipulation of the U.S. government. Financial aid to Israel began to pour like a river, all of it with no strings attached. According to The Christian Science Monitor, this outpouring has now cost U.S. taxpayers more than $1.4 trillion.

Costs go far beyond money. Thousands of American families are blighted forever, with America’s once high moral standing in shambles. Because of its unqualified support of Israel, Washington is hated worldwide as never before.

The principal source of Israel’s influence is the fear it seems to instill in every sector of our society. The most effective instrument of intimidation employed by its lobby is the reckless accusation of anti-Semitism, often leveled at anyone criticizing any aspect of Israeli behavior. I can personally certify that for many years it has cast a blanket of fear over Capitol Hill and blocked any semblance of debate.

I unintentionally contributed to that fear in 1985 when my book, “They Dare to Speak Out: People and Institutions Confront Israel’s lobby,” was published. It reports in detail the efficiency of Israel’s U.S. lobby, its history and tactics.

My book became a bestseller. I hoped it would inspire public officials and other citizens to revolt against the lobby’s influence on U.S. policy, but several of my former colleagues told me it had the opposite effect. One said, “After what AIPAC did to you and (Charles) Percy, I vote with the lobby every time.”

Israel’s grip on America seems impervious. Two distinguished political scientists, John Mearshiemer of the University of Chicago and Stephen Walt of Harvard, strode resolutely into the Middle East minefield a year ago by co-authoring a paper on Israel’s lobby. More recently, “Palestine: Peace Not Apartheid,” a book written by former President Carter, revered worldwide for his effective work on international conflict resolution, was published.

With few exceptions, America’s major editors, producers, commentators, academics and politicians have given these courageous initiatives the silent treatment. Nationwide, the lobby’s influence is pervasive, sustained and deep, a phenomenon unprecedented in U.S. history. It is impossible to explain the silence except as a reflection of profound fear.

The situation is highly dangerous. America has already paid a towering price for our subservience to Israel, and great additional burdens seem inevitable. If the United States is involved in acts of war against Iran, anti-American protest will rise to new heights, especially throughout the Islamic world. It will inevitably deepen the widely held belief among Muslims that America seeks to undermine Islam.

The outlook for reform is grim. Elected officials of both major political parties in Washington seem hopelessly captured by Israel’s agents. So does every serious candidate for the presidency in 2008. All U.S. citizens must accept a measure of responsibility for Israel’s grip on America. Those of us who knew what was happening did not protest with sufficient force and clarity. Those who did not know should have taken their responsibility as citizens more seriously. They should have informed themselves.

The scene is likely to improve only if U.S. elected officials are criticized so forthrightly from home that they fear a constituent revolt more than they fear Israel’s lobby. This, of course, will not happen until the countryside benefits from a rigorous and edifying public debate about Israel’s role in our national life.