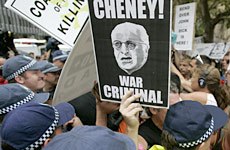 Friends, yes, Dead Eye is in town, and the War Criminal is generating protests, traffic gridlock and mayhem all around my city. The taxidriver I had today reported that it was chaos in the CBD. The radio news reports the controversy that our New South Wales (NSW) state law was changed so that Cheney’s Secret Servicemen could bring along their guns. Gun ownership in Australia is a privilege, not a right, and I’m glad guns are not freely available, and that we do not have an NRA-equivalent association here. Here’s a report from the Sydney Morning Herald today. In Tokyo too, the arch war criminal has been far from popular.

* MEDIA RELEASE
Protestors call on police to support the right to march
February 22, 2007

The Stop the War Coalition is concerned that Sydney is being shut down as US Vice-President Dick Cheney arrives in Sydney this evening.

NSW police today advised Stop the War Coalition that it is opposing a protest and march from going ahead saying that it will cause “unacceptable traffic disruption”. Rather than facilitate the march police are considering going to court to seek an injunction to stop the protest.

We do not think that half the city should be shut down because a war criminal is in town. Why should working people be inconvenienced by the enormous security operation that is presently underway. That’s what’s causing the traffic disruption, not the protestors, as the police are trying to allege.

Why has the NSW government acquiesced to the Howard government to give permission to US security forces to carry live weapons in our city?

Why is the NSW counter-terrorism unit being instructed to deal with peace activists?

Are we considered the threat, and if so, what does this say about the state government’s commitment to freedom of speech, let alone the democratic right of assembly?

The city will be closed off to protests and traffic. Army Black Hawk helicopters are buzzing through the city. The NSW government is permitting armed US bodyguards to roam the streets – what will it be like when US President George Bush comes to town later this year? Are our democratic rights being sacrificed to the war-mad US alliance?

Stop the War Coalition, in negotiations with the police, offered to alter the rally route to assist with police logistics, however this was rejected.