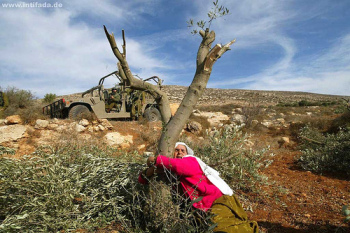 Saree Makdisi is a professor of English and Comparative Literature at UCLA and a frequent commentator on Middle East issues. Writing in the San Francisco Gate (20 Dec, page C-11):

Former President Jimmy Carter has come under sustained attack for having dared to use the term “apartheid” to describe Israel’s policies in the West Bank. However, not one of Carter’s critics has offered a convincing argument to justify the vehemence of the outcry, much less to refute his central claim that Israel bestows rights on Jewish residents settling illegally on Palestinian land, while denying the same rights to the indigenous Palestinians. Little wonder, for they are attempting to defy reality itself.

Israel maintains two separate road networks in the West Bank: one for the exclusive use of Jewish settlers, and one for Palestinian natives. Is that not apartheid?

Palestinians are not allowed to drive their own cars in much of the West Bank; their public transportation is frequently interrupted or blocked altogether by a grid of Israeli army checkpoints — but Jewish settlers come and go freely in their own cars, without even pausing at the roadblocks that hold up the natives. Is that not apartheid?

A system of closures and curfews has strangled the Palestinian economy in the West Bank — but none of its provisions apply to the Jewish settlements there. Is that not apartheid?

Whole sectors of the West Bank, classified as “closed military areas” by the Israeli army, are off limits to Palestinians, including Palestinians who own land there — but foreigners to whom Israel’s Law of Return applies (that is, anyone Jewish, from anywhere in the world) can access them without hindrance. Is that not apartheid?

Persons of Palestinian origin are routinely barred from entering or residing in the West Bank — but Israeli and non-Israeli Jews can come and go, and even live on, occupied Palestinian territory. Is that not apartheid?

Israel maintains two sets of rules and regulations in the West Bank: one for Jews, one for non-Jews. The only thing wrong with using the word “apartheid” to describe such a repugnant system is that the South African version of institutionalized discrimination was never as elaborate as its Israeli counterpart — nor did it have such a vocal chorus of defenders among otherwise liberal Americans.

The glaring error in Carter’s book, however, is his insistence that the term “apartheid” does not apply to Israel itself, where, he says, Jewish and non-Jewish citizens are given the same treatment under the law. That is simply not true.

Israeli law affords differences in privileges for Jewish and non-Jewish citizens of the state — in matters of access to land, family unification and acquisition of citizenship. Israel’s amended nationality law, for example, prevents Palestinian citizens of Israel who are married to Palestinians from the occupied territories from living together in Israel. A similar law, passed at the peak of apartheid in South Africa, was overturned by that country’s supreme court as a violation of the right to a family. Israel’s high court upheld its law just this year.

Israel loudly proclaims itself to be the state of the Jewish people, rather than the state of its actual citizens (one-fifth of whom are Palestinian Arabs). In fact, in registering citizens, the Israeli Ministry of the Interior assigns them a whole range of nationalities other than “Israeli.” In the official registry, the nationality line for a Jewish citizen of Israel reads “Jew.” For a Palestinian citizen, the same line reads “Arab.” When this glaring inequity was protested all the way to Israel’s high court, the justices upheld it: “There is no Israeli nation separate from the Jewish people.” Obviously this leaves non-Jewish citizens of Israel in, at best, a somewhat ambiguous situation. Little wonder, then, that a solid majority of Israeli Jews regard their Arab fellow-citizens as what they call “a demographic threat,” which many — including the deputy prime minister — would like to see eliminated altogether. What is all this, if not racism?

Many of the very individuals and institutions that are so vociferously denouncing President Jimmy Carter would not for one moment tolerate such glaring injustice in the United States. Why do they condone the naked racism that Israel practices? Why do they heap criticism on our former president for speaking his conscience about such a truly unconscionable system of ethnic segregation?