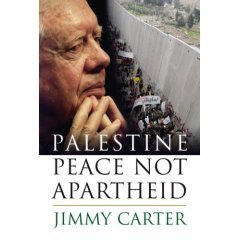 In his own words, well worth a read.

Oct 2006 Statement on the I-P Conflict

The unwavering official policy of the United States since Israel became a state has been that its borders must coincide with those prevailing from 1949 until 1967 (unless modified by mutually agreeable land swaps), specified in the unanimously adopted U.N. Resolution 242, which mandates Israel’s withdrawal from occupied territories. This obligation was reconfirmed by Israel’s leaders in agreements negotiated in 1978 at Camp David and in 1993 at Oslo, for which they received the Nobel Peace Prize, and both of these commitments were officially ratified by the Israeli government. Also, as a member of the International Quartet that includes Russia, the United Nations, and the European Union, America supports the Roadmap for Peace, which espouses exactly the same requirements. Palestinian leaders unequivocally accepted this proposal, but Israel has officially rejected its key provisions with unacceptable caveats and prerequisites.

… The overriding problem is that, for more than a quarter century, the actions of some Israeli leaders have been in direct conflict with the official policies of the United States, the international community, and their own negotiated agreements … Israel’s continued control and colonization of Palestinian land have been the primary obstacles to a comprehensive peace agreement in the Holy Land. In order to perpetuate the occupation, Israeli forces have deprived their unwilling subjects of basic human rights. No objective person could personally observe existing conditions in the West Bank and dispute these statements. (pp. 207-9)

The best offer to the Palestinians [at Camp David in December 2000] – by Clinton, not Barak – had been to withdraw 20 percent of the settlers, leaving more than 180,000 in 209 settlements, covering about 10 percent of the occupied land, including land to be “leased” and portions of the Jordan River valley and East Jerusalem.

The percentage figure is misleading, since it usually includes only the actual footprints of the settlements. There is a zone with a radius of about four hundred meters around each settlement within which Palestinians cannot enter. In addition, there are other large areas that would have been taken or earmarked to be used exclusively by Israel, roadways that connect the settlements to one another and to Jerusalem, and “life arteries” that provide the settlers with water, sewage, electricity, and communications. These range in width from five hundred to four thousand meters, and Palestinians cannot use or cross many of these connecting links. This honeycomb of settlements and their interconnecting conduits effectively divide the West Bank into at least two noncontiguous areas and multiple fragments, often uninhabitable or even unreachable, and control of the Jordan Valley denies Palestinians any direct access eastward into Jordan. About one hundred military checkpoints completely surround Palestinians and block routes going into or between Palestinian communities, combined with an unaccountable number of other roads that are permanently closed with large concrete cubes or mounds of earth and rocks.

There was no possibility that any Palestinian leader could accept such terms and survive, but official statements from Washington and Jerusalem were successful in placing the entire onus for the failure on Yasser Arafat. (pp. 151-2)

A new round of talks was held at Taba in January 2001, during the last few days of the Clinton presidency, between President Arafat and the Israeli foreign minister, and it was later claimed that the Palestinians rejected a “generous offer” put forward by Prime Minister Barak with Israel keeping only 5 percent of the West Bank. The fact is that no such offers were ever made. Barak later said, “It was plain to me that there was no chance of reaching a settlement at Taba. Therefore I said there would be no negotiations and there would be no delegation and there would be no official discussions and no documentation. Nor would Americans be present in the room. The only thing that took place at Taba were non-binding contacts between senior Israelis and senior Palestinians. (p. 152)

In April 2003 a “Roadmap” for resolving the Israeli-Palestinian conflict was announced by U.N. Secretary-General Kofi Annan on behalf of the United States, the United Nations, Russia, and the European Union (known as the Quartet).…The Palestinians accepted the road map in its entirety but the Israeli government announced fourteen caveats and prerequisites, some of which would preclude any final peace talks. (p. 159)

Gaza has maintained a population growth rate of 4.7 percent annually, one of the highest in the world, so more than half its people are less than fifteen years old. They are being strangled since the Israeli “withdrawal,” surrounded by a separation barrier that is penetrated only by Israeli-controlled checkpoints, with just a single opening (for personnel only) into Egypt’s Sinai as their access to the outside world. There have been no moves by Israel to permit transportation by sea or by air. Fishermen are not permitted to leave the harbor, workers are prevented from going to outside jobs, the import or export of food and other goods is severely restricted and often cut off completely, and the police, teachers, nurses, and social workers are deprived of salaries. Per capita income has decreased 40 percent during the last three years, and the poverty rate has reached 70 percent. The U.N. Special Rapporteur on the Right to Food has stated that acute malnutrition in Gaza is already on the same scale as that seen in the poorer countries of the Southern Sahara, with more than half of Palestinian families eating only one meal a day. (p. 176)

The area between the segregation barrier and the Israeli border has been designated a closed military region for an indefinite period of time. Israeli directives state that every Palestinian over the age of twelve living in the closed area has to obtain a “permanent resident permit” from the civil administration to enable them to continue to live in their own homes. They are considered to be aliens, without the rights of Israeli citizens.

To summarize: whatever territory Israel decides to confiscate will be on its side of the wall, but Israelis will still retain control of the Palestinians who will be on the other side of the barrier, enclosed between it and Israel’s forces in the Jordan River valley. (pp. 192-3)

The wall ravages many places along its devious route that are important to Christians. In addition to enclosing Bethlehem in one of its most notable intrusions, an especially heartbreaking division is on the southern slope of the Mount of Olives, a favorite place for Jesus and his disciples, and very near Bethany, where they often visited Mary, Martha, and their brother, Lazarus. There is a church named for one of the sisters, Santa Marta Monastery, where Israel’s thirty-foot concrete wall cuts through the property. The house of worship is now on the Jerusalem side, and its parishioners are separated from it because they cannot get permits to enter Jerusalem…. Its priest, Father Claudio Ghilardi, says, “For nine hundred years we have lived here under Turkish, British, Jordanian, and Israeli governments, and no one has ever stopped people coming to pray. It is scandalous. This is not about a barrier. It is a border. Why don’t they speak the truth?”

Countering Israeli arguments that the wall is to keep Palestinian suicide bombers from Israel, Father Claudio adds a comment that describes the path of the entire barrier: “The Wall is not separating Palestinians from Jews; rather Palestinians from Palestinians.” Nearby are three convents that will also be cut off from the people they serve. The 2,000 Palestinian Christians have lost their place of worship and their spiritual center. (pp. 194-5)

International human rights organizations estimate that since 1967 more than 630,000 Palestinians (about 20 percent of the total population) in the occupied territories have been detained at some time by the Israelis, arousing deep resentment among the families involved. Although the vast majority of prisoners are men, there are a large number of women and children being held. Between the ages of twelve and fourteen, children can be sentenced for a period of up to six months, and after the age of fourteen Palestinian children are tried as adults, a violation of international law. (pp. 196-7)

The United States has used its U.N. Security Council veto more than forty times to block resolutions critical of Israel. Some of these vetoes have brought international discredit on the United States, and there is little doubt that the lack of a persistent effort to resolve the Palestinian issue is a major source of anti-American sentiment and terrorist activity throughout the Middle East and the Islamic world. (pp. 209-10)

The bottom line is this: Peace will come to Israel and the Middle East only when the Israeli government is willing to comply with international law, with the Roadmap for Peace, with official American policy, with the wishes of a majority of its own citizens – and honors its own previous commitments – by accepting its legal borders. All Arab neighbors must pledge to honor Israel’s right to live in peace under these conditions. The United States is squandering international prestige and goodwill and intensifying global anti-American terrorism by unofficially condoning or abetting the Israeli confiscation and colonization of Palestinian territories. (p. 216)