Intelligent, emotional, ingenious: the amazing truth about whales and dolphins

Dolphins are probably my favourite animals. This article speculates whether behavioural patterns constitute culture and sounds constitute language. For once, I don’t think we’re personifying or being anthropomorphic about the way we see these cetacea as close to humans, I think they really are quite intelligent.

Jumping through watery hoops? Forget it. They can solve problems and use tools. They exhibit joy and grief. They live in complex societies.

Jumping through watery hoops? Forget it. They can solve problems and use tools. They exhibit joy and grief. They live in complex societies.

And although we have always instinctively thought that cetaceans – whales, dolphins and porpoises – are special members of the animal kingdom, scientific evidence is piling up that they are truly out of the ordinary in terms of their intelligence. 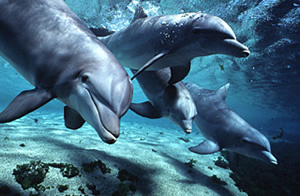 A growing number of behavioural studies strongly suggest that whale and dolphin brain power is matched only by the higher primates, including man, according to a new review of the scientific literature by one of Britain’s leading save-the-whale campaigners.

It means that the potential impact of whaling may be far greater than it appears, and we should adopt a new approach to the conservation of these species which takes into account their intelligence, societies, culture – and potential to suffer, says Mark Simmonds, director of science for the Whale and Dolphin Conservation Society.

In a scientific paper published this month, Mr Simmonds surveys recent cetacean research and highlights striking examples which have been observed of whale and dolphin behaviour. For instance, captive animals have been shown unequivocally to be able to recognise themselves in a mirror, which was previously known to be the domain only of humans and the great apes.

There are many other examples of intelligence, Mr Simmonds reports in his paper Into the brains of whales, being published in the journal Applied Animal Behaviour Science.

Dolphins can “point” at objects with their heads to guide humans to them, and they can also manipulate objects spontaneously, despite their lack of fingers and thumbs. There is a well-documented use of tools in an Australian population of wild Indo-Pacific bottlenose dolphins, he says. “The animals (almost exclusively females) are often seen carrying sponges on the ends of their beaks, probably to protect them while they forage in the sediments on the sea floor where spiny sea urchins might otherwise cause puncture wounds.”

They show remarkably human-like emotions, ranging from joy to grief to care for the injured. Mr Simmonds quotes a case of a 30-strong pod of false killer whales which remained with an injured member in shallows for three days, exposing themselves to sunburn and the risk of stranding, until it died.

Group living, in fact, is at the centre of cetacean existence, perhaps because the sea has few refuges from predators, and many species “have nothing to hide behind but each other”. It has led to the evolution of many types of sophisticated co-operative behaviour, from hunting, to young males banding together to secure mating partners. And there is an “emerging but compelling argument”, Mr Simmonds says, that some cetacean species exhibit culture – behaviour that is acquired through social learning.

He points out that since commercial whaling was put on hold in 1986, some of the devastated populations have recovered, but some have not. It is plausible, he says, that the whalers destroyed “not just numerous individuals, but also the cultural knowledge that they harboured relating to how to exploit certain habitats and areas.”

But the jury is still out, he says, on whether the vast range of sounds emitted by whales and dolphins constitutes language.