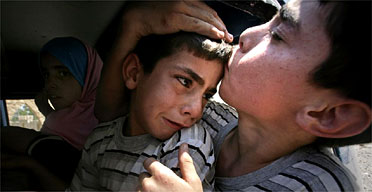 Israeli special forces were last night engaged deep within Lebanon as the army geared up for an expected major ground invasion. Troops were involved in fierce clashes and artillery pounded targets across southern Lebanon. The military also called in air strikes despite a previous commitment to a “partial” halt in air bombardments.Israeli commanders said that six brigades – several thousand soldiers – were now deployed inside Lebanon. At least 15,000 reserve troops, called up late last week, would be ready for combat from today, army sources said.

Last night Israeli commandos were reported to be in action against Hizbullah fighters 40 miles across the Lebanese border in the Beka’a valley, after landing by helicopter. Witnesses reported gunfire around a hospital to the west of the town of Baalbek, a Hizbullah stronghold.

According to the Lebanese army, the target of the raid was Sheikh Mohammed Yazbek, a member of the Hizbullah High Council, and representative in Lebanon of Iran’s supreme leader Ayatollah Ali Khamenei, who was reported to have been at the hospital earlier in the day.

The operation began with at least five rapid air strikes three hours before the end of Israel’s self-imposed two-day pause in air attacks.

Witnesses in Baalbek reported seeing dozens of Israeli helicopters hovering over the town and said the hospital was bombed. Hizbullah’s chief spokesman, Hussein Rahal, later said some Israeli commandos had become trapped in the hospital and that fighting – which had already lasted four hours – was continuing. Some of the soldiers injured in the raid were flown back to Haifa last night.

Mr Rahal dismissed as untrue reports that commandos had snatched patients from the hospital and flown them out of the town, but the operation is reminiscent of Israel’s 1994 raid on Lebanon to kidnap a guerrilla leader, Mustafa Dirani.

The military escalation came as diplomats in Brussels and at the UN security council again failed to make progress. EU ministers became bogged down in arguments over the meaning of “ceasefire” and settled for a watered-down compromise calling for a cessation of hostilities. Germany and four other countries joined Britain in opposing tougher language urged by France, calling for an immediate ceasefire and condemning Israel’s bombardment as “a severe breach of international humanitarian law”.

In a speech in Los Angeles, Tony Blair called for a fundamental reappraisal of British and US foreign policy, admitting excessive emphasis on military power and a failure to address the Palestinian issue had left the west losing the battle for hearts and minds in the Middle East.

The prime minister also sent a warning to Syria and Iran: “We need to make clear to Syria and Iran that there is a choice: come into the international community and play by the same rules as the rest of us; or be confronted.”

The Syrian government told its armed forces to raise their state of readiness, after Israel said it would target all vehicles believed to be carrying weapons from Syria to Lebanon.

There was intense fighting yesterday in the Lebanese village of Aitar al-Shaab, where Israeli paratroopers have been for two days; Hizbullah claimed it had killed or injured more than 30 Israeli soldiers there. Israel said three soldiers had been killed after Hizbullah fighters opened fire with anti-tank weapons on houses they were searching.

Yesterday afternoon, a few miles to the east, artillery rounds were seen fired into the village of Taibe, on the saddle of a hill range near where the strategic Litani river runs closest to the Israeli border. Thick brown smoke hung low over the village as buildings were pounded.

Israel’s prime minister, Ehud Olmert, under pressure to come out of the conflict with a convincing victory, claimed his troops were winning. He added that a process towards a ceasefire was under way, but an immediate cessation was not in Israel’s interests. “We are at the beginning of a political process that, in the end, will bring a ceasefire under entirely different conditions than before,” he said. But there would be no end until “we know for certain that conditions in the field have changed from those that would cause a war to break out”. Haim Ramon, the Israeli justice minister, said Hizbullah was at “breaking point”.

Military officials said the objective was to clear a strip of all Hizbullah positions up to 7km (4 miles) deep inside Lebanon. Military analysts said the army was likely to push further to the Litani itself, which at times runs as far as 20 or 30km inside Lebanon. Several Israeli ministers said there was up to 14 days of fighting to come.

Late last night at one position, 30 or 40 infantry gathered before heading north to fight. In full camouflage, faces painted green and black, and with night-vision goggles, their commander briefed them. “Keep your eyes open. Keep concentrating. Watch out for friendly fire. If you get into trouble, we have a medic in the unit.” They said a brief prayer, boarded coaches with loud music playing, and headed out.